We don't just make claims like other flight schools.  Air Trek North backs it up with the below references, not just claims by some flight instructor sitting in front of you.....   And be aware of flights schools that use terms like Always, Best, Largest, Most, Cheapest, etc.   Your mom told you red flags should go up when you hear terms like Always, Best, Largest, Highest, etc so always ask for an FAA document to support those claims.  The FAA doesn't make up stories.  If there is no FAA document, then the claim to be the biggest, largest, best probably isn't true.

1st Solo is such a special time for everyone!  We train, struggle, persist, dream and practice practice and then practice some more to get to this day.   And then, that darn instructor says 'Its all yours.   Complete three take off and landings to a full stop, then come back and see me'   Wow!   Adrenaline kicks in, nerves start to make you shake a little, your mind starts to question this decision, you taxi down to the runway, make your radio call, push the throttle forward and WOW!   You really can do this!

Congrats Allison and Joe!   You will remember this day forever!
​

Congrats to Steve Guetter as he just passed his Multi-Engine Instructor rating!   And on a day when the temps were subzero all day long and winds pounding the temps to around -20F!   Steve is one of our instructors and now has just about any rating you need or would want as a flight instructor....well maybe the Multi-Engine Seaplane might be on that 'bucket list' for pilots and instructors.

The weather has definitely not be kind to the VFR or small IFR pilots as of late but these two dudes were able to get enough flight time in to pass their Airplane Singe'Engine Commercial Pilot Check Rides!  Congrats Alex and John!!!!   Outstanding! 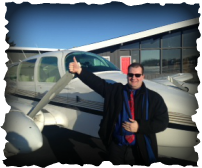 Jon Ingalls just had a stupendous day!   Jon just passed his initial CFI but did it the hard way....by using a twin engine and getting his Multi-Engine Instructor as his Initial Flight Instructor Rating!!!!

Wow!   He was so excited we took Jon out to Harry's Restaurant for the big celebration!

Jon did his Private Pilot at Embry Riddle but found out  'Big School' flight training costs are astronomical.  After the Private Pilot, Jon finished out all of his other ratings at the Lakeville airport.

John has one more rating in his sights, Single Engine Flight Instructor Add-On before heading to Flight Safety for his first real pilot job!

Britton was super excited!!!   He had come from Grand Forks with his commercial pilot and aviation degree from UND looking to fast track his CFI training in Air Trek North's Accelerated Program!

He started just before Thanksgiving, put his time in, and now is a CFI!   ...........Ready to teach others the joy of flying and super excited about it!

Britton wanted his celebration picture in the heated hanger next to the Piper Arrow and with the L39 Fighter Jet in the background.

Congrats Britton on getting your CFI today!
Click here to see pics of students from 2015 and before

More Students Who Have Passed Their Flight Tests!!!!     Wow!